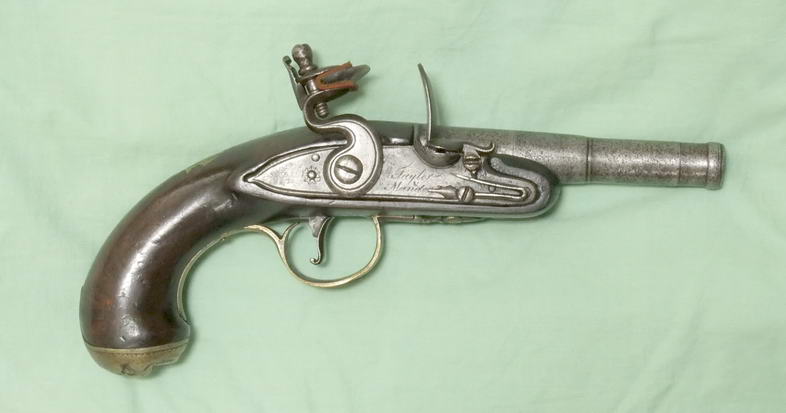 Later flintlocks had many refinements added but the operating principle was unchanged. Later examples have a bridle to support the interior end of the cock axle and reduce friction. From the early 19th century a roller bearing was added to the base of the fizzen, reducing friction with the fizzen spring.

The lock shown here was made by Taylor & Mander. The pistol to which it is fitted has a 4" cannon-barrel shown in the photo on the right. The pistol furniture is brass with grotesque mask butt-plate. It is a good example of the simple flintlock dating from around 1760.

The basic set of moving components have been animated to demonstrate how the flintlock mechanism works. This is just the lock mechanism removed from the wooden stock. The upper image shows the inside of the lock and the lower image the outside.

Once the gun is loaded with its powder charge and the ball is packed down on the charge with wadding, the sequence of events to fire the flintlock is as follows:

In this position the pan is primed with gun-powder. The fizzen, which incorporates the pan cover, is then snapped shut. The fizzen is held in place by the external fizzen spring. The pistol may be safely carried and handled in this loaded, half-cock state.

To enable firing, the cock is pulled back further until the sear engages with the second step in the tumbler. The lock is now cocked.

To fire the pistol, the trigger (not shown) rests against a projection at the rear of the sear. When the trigger is pulled its lifts the back of the sear. The sear tip slides off the tumbler. The tumbler is now free to rapidly rotate under the force of the main spring. The flint in the cock strikes the fizzen generating sparks of red hot metal as it scrapes down the fizzen face. The fizzen pivots backwards as it is stuck, exposing the pan to the shower of sparks. The motion of the cock is arrested by the shoulder of the cock hitting the top of the lock plate.