In the recent book "Civilization: The West and the Rest", historian Niall Ferguson attempted to identify the major factors that generated the rapid development of Western society over the last 500 years. He nominated the general acceptance of the scientific method as being one factor in providing, among other things, technological and military supremacy. As an example he cited the work of Benjamin Robins and his contribution to the physics of guns. This work significantly improved accuracy and effectiveness of the artillery of Western armies. 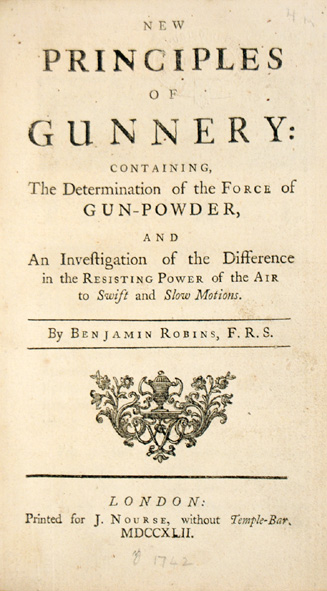 Robins' work on ballistics was published in 1742, as a short book entitled "The New Principles Of Gunnery". A later edition, published in 1805 includes "several other tracts on the improvement of practical gunnery" that Robins presented at the Royal Society.

"The New Principles Of Gunnery" has only 2 Chapters, in these Robins sets out a series of propositions which form a model of the physics of guns. He then reports the results of testing the model's predictions against experiment. A beautiful example of the scientific method.

The 18th century style of scientific writing was rather wordy and the mathematics was presented in a descriptive manner rather by using equations. To assist the modern reader in appreciating Robins' work, here is a brief summary of the book with the physics and mathematics of each proposition set out in a modern format.

Of the Force of Gunpowder

In this chapter, Robins puts forward thirteen propositions to model the behaviour of smooth bore, black powder guns firing Lead or Iron balls. The propositions are:

Of the Resistance of the Air, and of the Track described by the Flight of Shot and Shells

In this chapter, Robins puts forward eight propositions to develop a mathematical model for the trajectory of a projectile, taking into account air resistance.